There is something extraordinary about people coming together for a mass yoga or meditation session – there is a tingling in the air. Somehow we walk away more in tune with ourselves and more in touch with the rest of humanity. This was my experience during the last full moon meditation evening organised by Shift South Africa at Camps Bay in October 2015.

Shift South Africa is a non-profit organisation that spreads awareness regarding the social and individual benefits of meditation. This as a means to stay centered and balanced in a world that is currently in the process of shifting its view.  More specifically we are entering a Shift in Consciousness.  Like Paradigm Shift South Africa explains: “We believe that we are constantly shifting and taking enormous leaps in our evolution. We would like to be a part of this shift with the vision and motivation of creating a harmonious and peaceful world, one that would reflect the collective unity we share with all life as well as a society that will be driven by love, progress and discoveries rather than motivated by hatred, fear and destruction . . . Meditation has become widely accepted as a method to restore inner peace, freedom and contentment.”

By teaming up with Circles of Life, also a non-profit organisation, Shift South Africa introduced a certain playfulness to the generally accepted still state of becoming conscious through meditation. With the introduction of flow arts as a popular form of movement meditation, Circles of Life aims to share this practice with people specifically through hoola-hooping.

Just being on the breathtaking Camps Bay beach after one of the hottest days of the year set the right mood for the evening’s activities. The initial group of about 50 people was guided by Chloe Guilhermino through a few light Kundalini yoga movements. Then to the accompaniment of crashing waves the swelling numbers did downward dog and warrior poses in unison. By the end there were around 1000 people.

Ma Prem Shanti from led the evening’s meditation practice. Through a combination of traditional mindful meditation and movement meditation we first released any suppressed emotions and energy before sitting down to calm the mind. As Shanti explained: “This is an effective and playful guided meditation through which to find your ‘still point´ and the balance that it brings. Centred in the hara, we can access the qualities of calmness, courage, discipline and decisiveness.”

This specific meditation consisted of four stages. The first was about staying seated while moving the body in a clockwise direction. In stage two our awareness was brought to the space just below our diaphragm or centre. Shanti called it hara, our life force or the centre of consciousness. With our hands cupped on our hara, we walked around connecting with the people around us through eye contact only. This was followed by stage three, which was a very energetic dance to the sound of the mantra “Be your true self”. The session ended with a 15-minute silent meditation of drawing inwards and watching the breath. 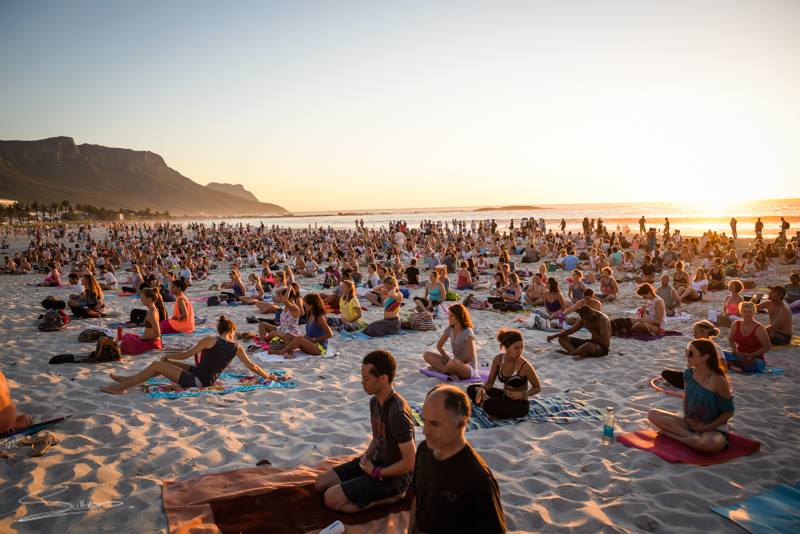 I found the second and third stages very meaningful. How often do we find ourselves walking face down with the sole focus of reaching our next destination? We are always busy, always on the move with no time to stop and look around.

What great connection there is in looking a stranger in the eye and giving him or her a smile!

During this meditation we were told: “Let go of any worries and troubles that you have. There is nowhere else that you need to be.” Realising the deep truth of this created an immediate state of ease and peace. With the evening coming to a close, we turned to face the last rays of the sun as it sank into the ocean. Finally we could truly “release the day that has passed. Let go of any moment that doesn’t serve you anymore. Begin a new day.” Marvellous. After this, those who were reluctant to leave this connected space were further entertained by fire dancers twirling with glowing sparks.

It is so easy to be discouraged by all that is still wrong in our country, but is truly gratifying to see so many people coming together, yearning for change and meditating as a collective for peace, love and harmony all over the world. For me, it is just that reminder that one is not alone.

When people from all over get together like this, one starts to think that maybe, just maybe . . . and with possibility, comes hope.

Shift South Africa offers full moon meditation throughout the year. To see the next upcoming event, visit their page http://paradigmshiftct.co.za/ or check out their Facebook page https://www.facebook.com/ParadigmShiftSouthAfrica/. Join them for the next full moon meditation event on Tuesday 24 November from 17:30.

I am a connector, organizer, teacher, visionary, artist and healer. This I choose to live out in my roles as literary coach, freelance book editing and proofreading, blogger, and events project manager. I run my own business called Living Connections where I aim to create meaningful experiences which makes new, fresh ideas accessible to people in order to help them grow personally. I am also the founder and organiser of the Cape Town Book Club of Life-changing books.